CHAUVET DJ to Distribute SoundSwitch
#GEAR | #LIGHTING | #CHAUVET
Chauvet & Sons LLC has entered into an agreement with New Zealand-based Onesixone Ltd to have CHAUVET DJ distribute the SoundSwitch hardware/software package throughout much of the world, including the UK. A revolutionary control solution, SoundSwitch allows DJs to trigger and sync their lighting while playing any song, in any order.

“This is a game changer for DJs who wish to create their own complete live lightshow,” said Chauvet CEO Albert Chauvet. “SoundSwitch puts the total show experience under the control of the DJ by seamlessly integrating DMX lighting with live audio.”

DJs can use SoundSwitch to attach lighting cues to their audio tracks and video files then automatically play them back in sync while performing using Serato DJ. Teaming up with a major lighting industry brand like Chauvet will further accelerate the global adoption of this breakthrough technology according to SoundSwitch Chief Executive Officer Zak Meyers. “SoundSwitch is a first-of-its-kind lighting solution for DJs and CHAUVET DJ is clearly a leader in DJ lighting,” he said. “So there is a great deal of synergy created by the two of us joining forces.”

Under the terms of the agreement, SoundSwitch will be sold through most of the CHAUVET DJ dealer network worldwide, including on an exclusive basis in the United States and its territories, Canada, Mexico, the Caribbean, Central America, Venezuela, Colombia, Guyana (French/English), Suriname, Peru, Ecuador, Bolivia, Paraguay, Belgium, the Netherlands, Luxembourg, France, and the United Kingdom. 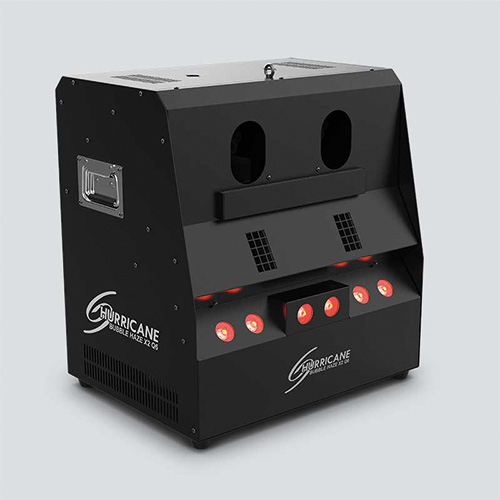 Just when you thought the party couldn't get any better.... Hello Bubble Haze X2!
Read